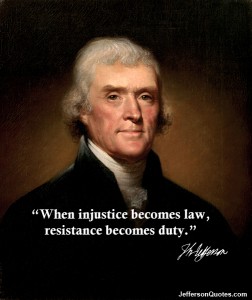 Two attacks on our system of checks and balances regarding police and the military are underway at the same time and it is dividing and conquering us as a whole.

On the one hand, when a “white policeman vs. black citizen” incident takes place, the Big Media is spring-loaded to make it the “cause celebre” news story for as long as possible in order to exacerbate tensions between blacks and whites at the grassroots level, as well as to give the US “Justice” Department a chance to try and federalize that local police department, i.e., bring about a National Police Department along the lines of the Soviet Union (KGB) and Nazi Germany (Gestapo). This was last attempted in the late 1960s during and after riots in black communities.

The push then for a national police force inspired groups all over the nation whose slogan was: “Support your local police, and keep them independent!” The late author and investigator, Alan Stang, wrote an insightful book at the time called, “It’s Very Simple.” Over 10 Years ago the so-called US Justice Department used an incident between a white policeman and a black youth to get their hooks into the Cincinnati Police Department (Ohio) and to start federalizing the Cincinnati Police Department. Since then, Cincinnati has had all out-of-town police chiefs that were trained to move towards a national police force (think Gestapo, KGB, all directed from some would-be tyrant in Washington D.C.)

See below the 7-minute video with Senator Rand Paul skewering the degenerates from Homeland Security concerning the distribution of around 12,000 military bayonets, among other military equipment to local police forces.

The racial incidents at the local level also give the agitators; both the financial types (such as Soros, many have charged) and the street thug variety, to try and create more incidents in the protests which follow. The more incidents, the more pressure will be brought from the hi-jacked Justice Department in Washington to nationalize the local police.

On the other hand, we have the unnecessary creation, Homeland Security, trying to militarize the local police by offering them military equipment, such as bayonets, MRAPS, weaponized aircraft, and grenade launchers.

Both of these trends must be exposed, resisted, and reversed.

The answer of HOW to effect change at the local level is The Precinct Strategy as found at NetworkAmerica.org. We often emphasize that we can change the US Congress, but in fact the party leaderships usually determine ultimately who is the local mayor, the City Council, the State Reps and Senators, the Governor, and everything else.  We the People need to BECOME the party leaderships via the Precinct Strategy.

Join us for our weekly conference call and join the battle to take back our country from the ground up from unconstitutional representatives.

Democratic and Republican Party leaders control virtually every county in the USA and are working against the Constitution and the Bill of Rights.

We encourage Liberty fighters to get involved as Precinct Captains/Chairs in their county, in the party of their choice, or as independents. The precinct captains elect county party leaders who endorse the candidates. Change the party leaders, change the lawmakers, and restore the Constitution.

This is how we can take back the nation for Liberty, precinct by precinct, county by county, and state by state.

Here is The Plan to Take Back the Republic!

Our Precinct Takeover Social Network is organized with over 20,000 groups from the National, State, and County levels throughout the United States including all the existing political parties at the county levels. Sign Up/Sign in to chat and share info with others during the call at:
www.networkamerica.org/network
After the presentation which will last 20 minutes or so, your live questions and/or comments will follow till about 11 PM EST. After the call “ends” around 11 PM, we will open up the phone lines so everybody can “talk amongst themselves” as always.

Excerpts from transcript: SENATOR PAUL. >> I THINK MANY OF US ARE HORRIFIED BY SOME OF THE IMAGES THAT CAME OUT OF FERGUSON. WE WERE HORRIFIED BY SEEING AN UNARMED BEING CONFRONTED BY AN ARMORED PERSONNEL CARRIER. WE’RE HORRIFIED BY SEEING AN UNARMED MAN WITH HIS HANDS OVER HIS HEAD BEING CONFRONTED BY A DRAWN ASSAULT WEAPON. WE’RE HORRIFIED BY IMAGES OF TEAR GAS BEING SHOT INTO THE YARDS OF PEOPLE’S PERSONAL HOMES WHO WERE PROTESTING. ONE OF THE FUNDAMENTAL THINGS ABOUT AMERICA IS DISSENT, AND THE ABILITY TO DISSENT. IT NEEDS TO BE PEACEFUL AND THERE NEEDS TO BE REPERCUSSIONS FOR THOSE WHO DO NOT ACT IN A PEACEFUL WAY. BUT CONFRONTING THOSE WITH ARMORED PERSONNEL. YOU SORT OF OBSCURE THAT SEPARATION IF YOU ALLOW THE POLICE TO BECOME THE MILITARY…

WE SPEND BILLIONS AND BILLIONS OF DOLLARS AND MAYBE TWO INSTANCES OF TERRORISM. I THINK BY SUPPLYING ALL OF THIS FREE EQUIPMENT, MUCH OF WHICH IS, FRANKLY, INAPPROPRIATE, SHOULDN’T BE ON ANYBODY’S LIST OF AUTHORIZED EQUIPMENT.

IN THE 1033 PROGRAM THEY LIST 12,000 BAYONETS HAVE BEEN GIVEN OUT. WHAT PURPOSE ARE BAYONETS BEING GIVEN OUT FOR? >> SENATOR, BAYONETS ARE AVAILABLE UNDER THE PROGRAM. I CAN’T ANSWER WHAT A LOCAL POLICE FORCE WOULD NEED A BAYONET FOR. >> I CAN GIVE YOU AN ANSWER. NONE.

SO, WHAT’S PRESIDENT OBAMA’S ADMINISTRATION’S POSITION OF HANDING OUT BAYONETS? IT’S ON YOUR LIST. ARE YOU GOING TO TAKE IT OFF THE LIST? >> WE’RE GOING TO LOOK AT WHAT WE’RE PROVIDING UNDER THE ADMINISTRATION’S REVIEW — >> SO IT’S UNCLEAR WHETHER PRESIDENT OBAMA APPROVES OF 12,000 BAYONETS BEING GIVEN OUT? I WOULD THINK YOU COULD MAKE THAT DECISION LAST WEEK. >>

I THINK WE NEED TO REVIEW ALL THE EQUIPMENT WE’RE PROVIDING, SENATOR. WE, THE DEPARTMENT OF DEFENSE, DO NOT PUSH ANY OF THIS EQUIPMENT ON ANY POLICE FORCE. THE STATES DECIDE WHAT THEY NEED. >>MY UNDERSTANDING IS YOU HAVE THE ABILITY TO DECIDE WHAT EQUIPMENT IS GIVEN OUT AND WHAT EQUIPMENT IS NOT GIVEN OUT. IF YOU DECIDED TOMORROW, IF PRESIDENT OBAMA DECIDED TOMORROW THAT MINE-RESISTANCE AMBUSH PROTECTION 20-TON VEHICLES ARE NOT APPROPRIATE FOR CITIES IN THE UNITED STATES, HE COULD DECIDE TOMORROW TO TAKE IT OFF THE LIST. YOU COULD DECIDE THIS TOMORROW.

MY QUESTION IS, WHAT IS THE ADMINISTRATION’S OPINION ON GIVING OUT MINE-RESISTANT AMBUSH PROTECTION 20-TON VEHICLES TO TOWNS ACROSS AMERICA — ARE YOU FOR IT OR AGAINST IT? >> OBVIOUSLY, WE DO IT SENATOR. WE’LL LOOK AT THAT. I CAN ALSO SAY WE CAN GIVE YOU ANECDOTES FOR MINE-RESISTANT AFTER BUCK PROTECTED VEHICLES FOR POLICE SHOOTOUTS. >> WE’VE BEEN TOLD THEY’RE ONLY SUPPOSED TO BE USED FOR TERRORISM, RIGHT? ISN’T THAT WHAT THE RULE IS? >> IT’S FOR COUNTERDRUG, WHICH COULD HAVE BEEN THE SHOOTOUT. I WOULD HAVE TO LOOK AT THE INCIDENT. COUNTERNARCOTICS, COUNTERTERRORISM.

>> I GUESS THE POINT I WISH TO MAKE IS THAT THESE ARE FAIRLY SIMPLE PROBLEMS AND COMMON SENSE APPLIED YEARS AGO L YEARS AGO. YOU KNOW, WE COULD HAVE FIXED THESE. WE’LL MAYBE FIX THEM, ALTHOUGH I HAVE MY DOUBTS. I’VE SEEN RARELY ANYTHING FIXED IN GOVERNMENT. I WOULD SAY WE’RE NOW RESPONDING TO A TRAGIC CIRCUMSTANCE, YOU KNOW, IN FERGUSON TO DO THIS. BUT I THINK THAT I — YOU KNOW, I FIND THESE DECISIONS TO BE VERY EASY TO MAKE. YOU JUST SHOULDN’T BE GIVING OUT MINE-RESISTANT VEHICLES. BAYONETS, I DON’T KNOW WHY WE HAVE TO GET TOGETHER AND HAVE A STUDY FOR MONTHS TO DECIDE BAYONETS ARE INAPPROPRIATE TO BE GIVEN OUT. REALLY, IT’S GOTTEN OUT OF CONTROL. AND THIS IS LARGELY BEEN SOMETHING THAT THE MILITARIZATION OF POLICE IS SOMETHING THAT’S GOTTEN SO FAR OUT OF CONTROL, AND WE’VE ALLOWED IT TO DISSEND ALONG WITH NOT A GREAT PROTECTION OF OUR CIVIL LIBERTIES AS WELL. SO, WE — YOU KNOW, WE SAY WE’RE GOING TO DO THIS. IT’S OKAY IF IT’S FOR DRUGS. WELL, LOOK AT THE INSTANCES OF WHAT HAVE HAPPENED IN RECENT TIMES. THE INSTANCE IN GEORGIA JUST A COUPLE MONTHS AGO OF AN INFANT IN A CRIB GETTING A PERCUSSION GRENADE THROWN THROUGH A WINDOW IN A NO-KNOCK RAID. TURNS OUT THE INFANT, OBVIOUSLY, WASN’T INVOLVED IN THE DRUG TRADE BUT EITHER WAS THE INFANT’S FAMILY. HAPPENED TO BE IN THE WRONG PLACE AT THE WRONG TIME. NO ONE HAS EVEN BEEN INDICTED ON THIS. REALLY, THIS IS CRAZY, OUT OF CONTROL. GIVING MILITARY EQUIPMENT AND WITH THE BREAKDOWN OF THE WHOLE IDEA OF DUE PROCESS OF NO-KNOCK RAIDS AND NOT HAVING JUDGES ISSUE WARRANTS ANYMORE, YOU CAN SEE HOW THIS GETS

It was reported that Obama will no longer give U.S. Police; bayonets, weaponized aircraft, and grenade launchers, however, there was no mention if they were going to take back the 12,000 bayonets and other inappropriate equipment they had already dispensed.

In addition, it is clear from this hearing that the “war on drugs” has been lumped into the same category as terrorism “WE’VE BEEN TOLD THEY’RE (MRAPS) ONLY SUPPOSED TO BE USED FOR TERRORISM, RIGHT? ISN’T THAT WHAT THE RULE IS? >> IT’S FOR COUNTERDRUG, WHICH COULD HAVE BEEN THE SHOOTOUT. I WOULD HAVE TO LOOK AT THE INCIDENT. COUNTERNARCOTICS, COUNTERTERRORISM.”

VIDEO: Police pepper spraying and arresting students at UC Davis Peaceful Protest – THIS IS WHAT AN UNARMED PROTEST LOOKS LIKE

The REAL Bundy Ranch Story: Feds Forced to Surrender to American Ctizens – THIS IS WHAT AN ARMED PROTEST LOOKS LIKE

Here is the video you WILL NOT SEE on the mainstream media. The BLM did NOT simply “leave” and return the Bundy cattle. They were going to KEEP the cattle — until a group of brave patriots and cowboys from 7 Western states stood up to sniper guns and FORCED the release themselves.

We the People can enforce our rights under the Constitution and Bill of Rights or we will surely lose our rights. When injustice becomes law, resistance becomes duty. – Thomas Jefferson