For up-to-the-minute information on the Election Night Gatekeepers and the 2016 Presidential Campaign, please visit —ElectionNightGatekeepers.com

For in depth mechanics of how the “open conspiracy” against American elections works, and who the key players involved are, click HERE to see “There is a Plan”, Part 2:

This Guardians for Liberty page is also very informative with a lot of good videos as well, click HERE to visit this site

If possible, see the first four videos on this page; the first three are about 10-minutes each, the fourth is a 90-minute Documentary “Hacking Democracy” put out by HBO.

The following is based on an email I wrote to a great Gentleman who wanted to study this Votescam issue. It was originally sent out on November 12, 2009, but has been updated several times. – Jim Condit Jr.

I would first suggest watching, “South Carolina, Super Tuesday, and Ron Paul” — an attempted first lesson “10 minute college course” on the state of our deplorable elections system. Here it is:

The following video was made in December of 2011 to try and get a fair count for Ron Paul and everybody else – in the 2012 Iowa Presidential Caucuses. The first 13 minutes or so are most relevant to the future, but the “billboards” in the last 7 minutes of the video may be useful also.

Once this  above video was released on 12-24-2007, the traitorous, deep plants within the Ron Paul Presidential Campaign 2012 dropped their masks and also dropped everything else to give priority to stopping the “Watch the Vote” effort for the next ten days, which is proof of how effective the strategies and concepts described in the above video are.

Here is a 3 minute excerpt from the above video where Ron Paul is exhorting citizens to “watch the vote” and restore integrity to the voting system:

The deep plants in the Ron Paul Presidential campaign 2012 went berserk when we published this short video a few days before the 2012 Iowa Presidential Caucus circa 12-27-07, going so far as to produce bogus letters, one supposedly from Ron Paul himself, — urging Ron Paul supporters NOT to come into Iowa from surrounding states to get out the vote and watch the vote! This was the first time in US history that a Presidential Candidate’s campaign urged “get out the vote” and “watch the vote” supporters to stay home and stay out of the caucus state about to be held and decided. For instance, the Eugene McCarthy New Hampshire Presidential campaign of 1968, which destroyed President Lyndon Johnson’s re-election bid, asked as many anti-Vietnam war activists as possible to come into New Hampshire and get out the vote for McCarthy against President Johnson. (But, then again, McCarthy’s Presidential campaign wasn’t riddled with traitors serving the Ruling Elite bad guys.)

The disturbingly shocking HBO documentary HACKING DEMOCRACY bravely tangles with our nation’s ills at the heart of democracy. The film the Diebold corporation doesn’t want you to see, this revelatory journey follows tenacious Seattle grandmother Bev Harris and her band of extraordinary citizen-activists as they set out to ask one simple question: How does America count its votes? From Florida and California to Ohio and Washington State, filmmakers Simon Ardizzone, Robert Cohen, and Russell Michaels starkly reveal a broken system riddled with secrecy, incompetent election officials, and electronic voting machines that can be programmed to steal elections. Equipped only with a powerful sense of righteous outrage, the activists take on voting machine industry, exposing alarming security holes in America’s trusted voting machines.

They even go dumpster diving at a county election official’s office in Florida, uncovering incendiary evidence of miscounted votes. But proving our votes can be stolen without a trace culminates in a duel between Diebold voting machines and a computer hacker from Finland – with America’s democracy at stake. 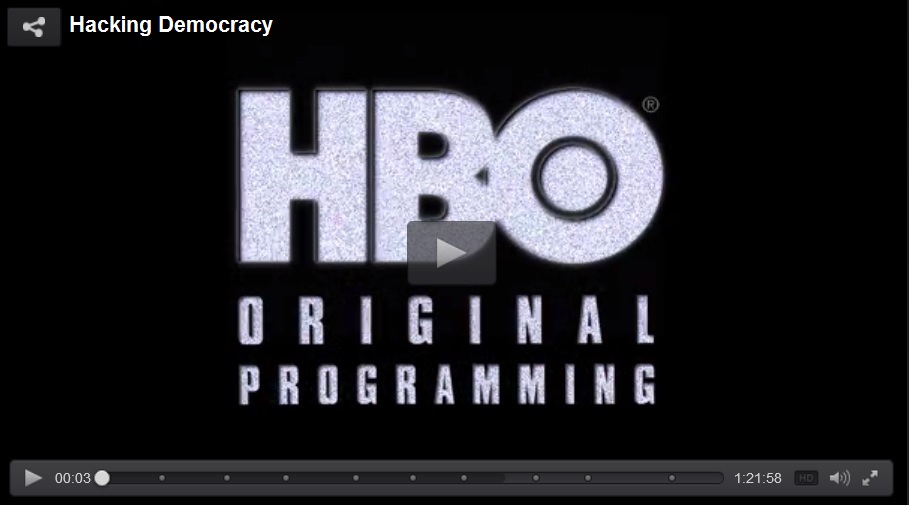 Next: here is an article which explains the mechanics of how the Votescam establishment fixed elections. The event which led to this article was the proven theft of 13% of Pat Buchanan’s vote in Dubuque County in the February 12, 1996 Iowa Presidential Caucus. The article appeared in the November 1996 issue of Chronicles magazine, and is entitled, “A House without Doors” — here it is:

And here is proof of computerized vote manipulation in the John Boehner-Jim Condit Jr. race of 2010. The screen shots are provided showing that Jim Condit Jr. was coming in 2nd all night behind Republican John Boehner (incumbent and Speaker of the House, US House of Representatives) with about 20% of the vote, and ahead of the Democrat, who had about 16% of the vote all night. This was reported throughout the night on local and national radio and TV, and in the Cincinnati Enquirer the next morning. HOWEVER, 20 minutes AFTER the final vote was in, with 100% of the Precincts reporting — the boys at around National Election Pool (NEP) stole 33,000 of Condit’s votes and gave those votes to the Democrat. And this is what was certified as the “official results” by the local Boards of Election in John Boehner’s district, Ohio congressional district 8. Here is the link to this story:

For in depth mechanics of how the “open conspiracy” against American elections works, and who are the key players involved, please see “There is a Plan”, Part 2:

I’ve listed some other books and DVD’s next, but the last section has articles immediately available through my website, votefraud.org

I believe the entire state of Georgia used the “paperless, ballot-less” computer voting systems in the year that Saxby Chambliss was “elected.” Since then, they’ve returned to ballots. Columbus, Ohio also used this absurd system around 2000 for an election or two.

The Right to Count DVD

At www.therighttocount.com – (I am the last person on the trailer); which you can watch for free online

Votescam: The Stealing of America – by James and Ken Collier, 1992 (my family’s efforts in Cincinnati, Ohio in 1985 are found in chapter 12 of that book); this book is available online at www.votescam.org — a few chapters are free online though that website, I think.

BlackBoxVoting.org – the 2002 book, “Black Box Voting” is up for free, chapter by chapter on that homepage.

http://www.thelandesreport.com/
Look for the votefraud information – Lynn Landes is a superb reporter, and at the very, very top of those reporting on the computerized election issue…

www.votefraud.org – is my website and was the earliest up on the web, in March 1996, (thanks to Linda Muller, who was also the webmaster for Pat Buchanan’s Presidential Campaign at that time) on this issue of “Honest, Open Ballot Counts” vs. “Secretly counted computerized elections.”

Here are some articles to read, and why. All these articles are linked on the home page of votefraud.org in the blue box to the left hand side of the page, a few inches down, but here are the direct links.

Read at least the first few paragraphs of the above article, which appeared in the Nation magazine in 2004. Duggar details the four computer companies that “count” 96% of the American vote on election night.

The Dems and Repubs at national, state, and county levels – have turned the voting system over to primarily 4 companies. It’s the Dems and Repubs that betrayed us into the hands of the info-criminals running these four companies, — the same crowd that runs the 5 TV networks and the FED.

16 pages, superb; all you need to know up till 1996; this and the youtube, South Carolina, Super Tuesday, and Ron Paul – gives you a full education.

http://www.votefraud.org/how_a_private_company_counts_our_votes.htm
How our votes are counted by a Private Company on Election night by Christopher Bollyn

Eyewitness account from Cook County Illinois on election night 2004. Bollyn sees AP wire girl reading novel while her laptop is hooked up to mainframe computer sending real time election results back to NYC. This is how they monitor and, if necessary, change the vote in key elections.

A House Without Doors, by Jim Condit Jr.

How Pat Buchanan and his supporters were defrauded by the GOP of Iowa, the 4 big TV Networks (No FOX Cable then), AP wire, and Voter News Service in Dubuque County, Iowa on March 12, 1996

http://www.votefraud.org/News/
Network America Archive, Jan 2010 to June 2001 – a lot of info on this subject week by week

The Greatest Coverup of all: Votefraud in America by Jim Condit Jr.

About the situation from 1973 to 1988 written in 1992; our own experiences in Cincinnati are relied on as a touchstone point, but this was happening throughout the entire nation.

Finally, only ½ of New Hampshire holds out, and perhaps a few small counties in Idaho, Montana, and Texas, although I am unconvinced of these until further investigation; counting the NUMBER of ballots cast, which all jurisdictions allow, is NOT counting the ballots and votes at the neighborhood precinct before they disappear.

Anyone can call their local board of elections, or secretary of state – and ask what is the procedure for citizens to SEE THE ACTUAL BALLOTS on election night, before the ballots leave the neighborhood precinct, and for local citizens to count the ballots – in order to double check the computer programming. If anyone anywhere finds there is a procedure to do so, we will send observers to watch it.

The Board of Elections officials will talk about everything else, especially how “safe’ their procedures are. The whole idea is to hide the ballots from the people on election day and for about 21 days thereafter, — for what reason? Obviously so that elections can be fixed when “need be.”

In most precincts now, the voter marks a paper ballot, feeds it into an ATM type machine – into which the ballot disappears, never to be seen again on election day – or until, and IF, there is a recount, usually held about 21 days later. 21 days is plenty of time to switch ballots to make the published computer “results” come “true.”

The “sin” of the local election officials is not they they are doing the fixing. Their sin is standing aside and delegating the all important processing of the ballots to four, mysterious private companies who — I assure you — are not working for the American people.

Before the computer/machine age – if the ballots ever disappeared from the sight of the neighborhood judges before they were counted – then all the ballots were viewed as spoiled, and the election was done over in that precinct. In former times Americans knew that if anyone wanted to hide the ballots from the people before they count was done at the precinct level – that they were up to no good.

We never use the term “voter fraud”, because the number of voters who would try to commit fraud pales into nothingness next to the guys running the computers for the elections in 99% of the nation – being able to fix the computers because they have the codes that tell the computers what to do; It is votefraud that we are worried about – computerized votefraud perpetrated by Diebold, ES &S, Hart, and Sequoia, — while the local and state election officials stand back and use the police power to block the citizens from seeing what these 4 mega-companies are doing to the nation’s votes on election day.

For further information on the Votescam crisis, check out the articles in the royal blue box on the right hand side of the Home Page at: www.votefraud.org