Meet the First Lady of Syria – You won’t believe her background! Why are we attacking Syria?

Meet the First Lady of Syria – You won’t believe her background!

Why are we attacking Syria? 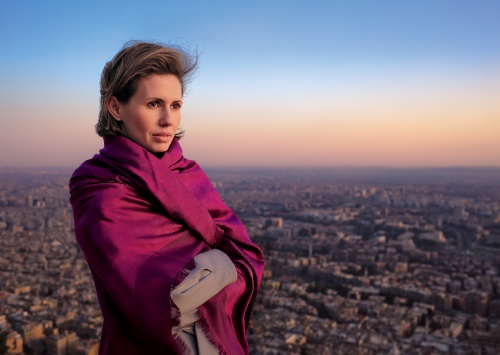 The First Lady of Syria

As the first lady of Syria, Asma Akhras al-Assad initiates and supports programs designed to foster economic development and improve the quality of life for all Syrian people. She focuses her energies on issues concerning rural development technology.

In July 2001, she established Syria’s first rural development NGO, known as the Fund for Integrated Rural Development of Syria (FIRDOS). The fund aims to play a leading role in advancing comprehensive and sustainable human development through the direct participation of the Syrian population. During her frequent visits to villages and local communities throughout the country, Mrs. Assad stresses the importance of strengthening and enhancing the capacity of communities, whilst respecting the positive values of local culture and heritage.

Mrs. Assad is committed to highlighting the key role of women in the development process and to facilitating their participation. She recently hosted the “Women and Education” forum which gathered First Ladies from six various Arab countries and delegations from all 22 Arab countries. The three-day event gathered viewpoints and opinions on new trends and methodologies in education. She actively supports the Syrian Business Women’s Committee in the Chamber of Commerce. In April 2002, she hosted the Women in Business Conference, the largest gathering of businesswomen in the Middle East.

On World Children’s Day in June 2002, Mrs. Assad launched the first National Children’s Book Fair, which featured authors, artists and publishers from around the country. She believes learning is the product of an open and diversified society and access to knowledge, experience, and the enhancement of learning will improve the quality of life. She encourages parents to spend more time with their children, to involve them in family affairs and to always ask for and respect their opinions.

Disadvantaged children are of particular concern to Mrs. Assad. She works tirelessly to raise public awareness of children in special circumstances and draws attention to their emotional and psychological needs. In her speeches and public appearances, she stresses the importance of the family nucleus ‘a strong family is a strong society’.

Her interest in Information and Communication Technology (ICT) began during her school years and has developed over the years. In July 2002, she initiated the first Mobile Information Center (MIC) in the Middle East, to help bridge the gap between the information-rich and information-poor communities in Syria. The MIC serves the purpose of a fully equipped mobile computer classroom, which travels through Syria’s remote villages to conduct ICT literacy programs. Mrs. Assad is an active sponsor of events that promote the history, culture and arts of Syria.

She attended King’s College University of London and graduated in 1996 with a bachelor of Science first class honors degree in Computer Science and a Diploma in French Literature. After university, she spent six months traveling throughout the Far East and Europe. Upon her return in 1997, she started work at Deutsche Morgan Grenfell in London (now known as Deutsche Bank) as an analyst in the Hedge Fund Management section of Sales and Trading. She covered clients in the Far East and Europe.

In 1998, she joined the investment banking division of JP Morgan, London. She specialized in Mergers and Acquisitions for Biotechnology and Pharmaceutical companies. During the three years she spent at JP Morgan, she was sent to their Paris office for 9 months and to the New York office for 18 months, where she advised and executed four large merger transactions for both European and American clients.

After leaving JP Morgan in November 2000, she returned to Syria and married Bashar al-Assad in December 2000. On December 3, 2001, they became the proud parents of their first-born child, named Hafez after his late grandfather. Then Zein was born on November 5, 2003, and Kareem on December 16, 2004.

She was born in London on August 11, 1975 to Fawaz and Sahar Akhras. Her father is a Harley Street Consultant Cardiologist and her mother previously held the diplomatic Post of First Secretary in the Syrian Embassy in London. She has two younger brothers, Feras who is studying Medicine and Eyad who is studying for a Master of Science degree in the History of International Relations. She lived in London for the first 25 years of her life. She speaks Arabic, English, French and Spanish.

Today she brings her experienced viewpoints and her focus on sustainable development to a much broader audience as the wife of the president of the Syrian Arab Republic, Bashar al-Assad.

Mrs. Asma Al-Assad, October 21, 2004, received Honorary Doctorate from the prestigious University of Rome “La Sapienza” in Archaeology for the development of historical and archaeological studies in Syria.

Her Excellency, Mrs. Asma Al-Assad has been nominated, February 24th 2008, by the Arab Woman Participation Studies Centre, in cooperation with the Arab League, as the First Arab Lady for the year 2008. Mrs. Al-Assad has been chosen for this prestigious title in recognition of her strenuous efforts in bolstering of the human development, especially as far as the bringing up, enabling and upgrading the youth capacity as to deal with the 21st Century challenges.

pronunciation (help·info)Levantine pronunciation: [baʃˈʃaːr ˈħaːfezˤ elˈʔasad]; born 11 September 1965)[1] is the President of Syria, General Secretary of the Ba’ath Party and Regional Secretary of the party’s branch in Syria. He has served as President since 2000, when he succeeded his father, Hafez al-Assad, who led Syria for 30 years until his death.

Assad graduated from the medical school of Damascus University in 1988, and started to work as a physician in the army. Four years later, he attended postgraduate studies at the Western Eye Hospital, in London, specializing in ophthalmology. In 1994, after his elder brother Bassel—who was being groomed to succeed his father[2]—was killed in a car crash, Bashar returned to Syria. Assad would later claim that he never supported an Assad dynasty, and that his brother had no position in Syrian politics when his father was there.[3] Assad entered the military academy, taking charge of the Syrian occupation of Lebanon in 1998. In December 2000, Assad married Asma Assad, born Akhras. Assad was reconfirmed by the national electorate as President of Syria in 2000 and 2007, after the People’s Council of Syria had voted to propose the incumbent uncontested each time.[4][5]
http://en.wikipedia.org/wiki/Bashar_al-Assad

So, why are we attacking Syria?

Al-Assad is an eye doctor and highly educated. He is dealing with fully-funded “terrorist” that the U.S. and Israel are creating, arming, training and dropping into his country. He is not a freckle on the ass of the terrorists in the U.S., Israel and Britain who are responsible for the murder of millions of innocent people in their multiple wars based on lies and false flag attacks.

Good lord, haven’t we learned anything? What gives anybody the right to go to war with his country based on lies and propaganda? Just drop in some boogie men and tell the world you are fighting the boogie men you created and everybody just eats up those illogical lies?

And why would al-Assad “exterminate” his own people? It makes no logical sense. I hope the world wakes up, because if they don’t we will be conquering one country after another; all Expansionist Projects for Israel and it has nothing to do with what is best for the people whose countries we are invading or the United States. Wake up and smell the Israeli takeover America!