Update: This has passed!

WASHINGTON — Wall Street lobbyists are trying to secure taxpayer backing for many derivatives trades as part of budget talks to avert a government shutdown.

According to multiple Democratic sources, banks are pushing hard to include the controversial provision in funding legislation that would keep the government operating after Dec. 11. Top negotiators in the House are taking the derivatives provision seriously, and may include it in the final bill, the sources said.

The bank perks are not a traditional budget item. They would allow financial institutions to trade certain financial derivatives from subsidiaries that are insured by the Federal Deposit Insurance Corp. — potentially putting taxpayers on the hook for losses caused by the risky contracts. Big Wall Street banks had typically traded derivatives from these FDIC-backed units, but the 2010 Dodd-Frank financial reform law required them to move many of the transactions to other subsidiaries that are not insured by taxpayers.

Taxpayer insurance helps banks secure higher credit ratings for their derivatives, since taxpayers assume some of the risk, which in turn makes the banks more profitable.

Last year, Rep. Jim Himes (D-Conn.) introduced the same provision under debate in the current budget talks. The legislative text was written by a Citigroup lobbyist, according to The New York Times. The bill passed the House by a vote of 292 to 122 in October 2013, 122 Democrats opposed, and 70 in favor. All but three House Republicans supported the bill.

Himes was passed over for leadership positions after the 2014 midterm elections, which he said he interpreted as unrest within the Democratic Party over his strong ties to financial elites.

“My guess is, it was a factor, which is disappointing because I think the criticism is way off base,” said Himes, who previously worked at Goldman Sachs.

It wasn’t clear whether the derivatives perk will survive negotiations in the House, or if the Senate will include it in its version of the bill. With Democrats voting nearly 2-to-1 against the bill in the House, Senate Majority Leader Harry Reid (D-Nev.) never brought the bill up for a vote in the Senate. President Barack Obama opposed the bill ahead of the House vote, as did former FDIC Chair Shiela Bair, former House Financial Services Committee Chairman Barney Frank (D-Mass.) and Rep. Maxine Waters (D-Calif.), currently the top Democrat on the Financial Services Committee.

If the quadrillion dollar derivatives bubble implodes, who should be stuck with the bill? Well, if the “too big to fail” banks have their way it will be you and I. Right now, lobbyists for the big Wall Street banks are pushing really hard to include an extremely insidious provision in a bill that would keep the federal government funded past the upcoming December 11th deadline. This provision would allow these big banks to trade derivatives through subsidiaries that are federally insured by the FDIC. What this would mean is that the big banks would be able to continue their incredibly reckless derivatives trading without having to worry about the downside. If they win on their bets, the big banks would keep all of the profits. If they lose on their bets, the federal government would come in and bail them out using taxpayer money. In other words, it would essentially be a “heads I win, tails you lose” proposition.

Just imagine the following scenario. I go to Las Vegas and I place a million dollar bet on who will win the Super Bowl this year. If I am correct, I keep all of the winnings. If I lose, federal law requires you to bail me out and give me the million dollars that I just lost.

Does that sound fair?

Of course not! In fact, it is utter insanity. But through their influence in Congress, this is exactly what the big Wall Street banks are attempting to pull off. And according to the Huffington Post, there is a very good chance that this provision will be in the final bill that will soon be voted on…

According to multiple Democratic sources, banks are pushing hard to include the controversial provision in funding legislation that would keep the government operating after Dec. 11. Top negotiators in the House are taking the derivatives provision seriously, and may include it in the final bill, the sources said.

Sadly, most Americans don’t understand how derivatives work and so there is very little public outrage.

But the truth is that people should be marching in the streets over this. If this provision becomes law, the American people could potentially be on the hook for absolutely massive losses…

The bank perks are not a traditional budget item. They would allow financial institutions to trade certain financial derivatives from subsidiaries that are insured by the Federal Deposit Insurance Corp. —potentially putting taxpayers on the hook for losses caused by the risky contracts.

This is not the first time these banks have tried to pull off such a coup. As Michael Krieger of Liberty Blitzkrieg has detailed, bank lobbyists tried to do a similar thing last year…

Five years after the Wall Street coup of 2008, it appears the U.S. House of Representatives is as bought and paid for as ever. We heard about the Citigroup crafted legislation currently being pushed through Congress back in May when Mother Jones reported on it. Fortunately, they included the following image in their article:

Unsurprisingly, the main backer of the bill is notorious Wall Street lackey Jim Himes (D-Conn.), a former Goldman Sachs employee who has discovered lobbyist payoffs can be just as lucrative as a career in financial services. The last time Mr. Himes made an appearance on these pages was in March 2013 in my piece: Congress Moves to DEREGULATE Wall Street.

Fortunately, it was stopped in the Senate at that time.

But that is the thing with bank lobbyists. They are like Terminators – they never, ever, ever give up.

And they now have more of a sense of urgency then ever, because we are moving into a period of time when the big banks may begin losing tremendous amounts of money on derivatives contracts.

For example, the rapidly plunging price of oil could potentially mean gigantic losses for the big banks. Many large shale oil producers locked in their profits for 2015 and 2016 through derivatives contracts when the price of oil was above $100 a barrel. As I write this, the price of oil is down to $65 a barrel, and many analysts expect it to go much lower.

So guess who is on the other end of many of those trades?

Their computer models never anticipated that the price of oil would fall by more than 40 dollars in less than six months. A loss of 40, 50 or even 60 dollars per barrel would be catastrophic.

No wonder they want legislation that will protect them.

Let them know how you feel about this Bill and remind them that We the People are watching their votes! It just takes a couple of clicks.

And commodity derivatives are just part of the story. Over the past couple of decades, Wall Street has been transformed into the largest casino in the history of the world. At this point, the amounts of money that these “too big to fail” banks are potentially on the hook for are absolutely mind blowing.

As you read this, there are five Wall Street banks that each have more than 40 trillion dollars in exposure to derivatives. The following numbers come from the OCC’s most recent quarterly report (see Table 2)…

Those that follow my website regularly will note that the derivatives exposure for the top four banks has gone up significantly since I last wrote about this just a few months ago.

Do you want to be on the hook for all of that?

Keep in mind that the U.S. national debt is only about 18 trillion dollars at this point.

So why in the world would we want to guarantee losses that could potentially be far greater than our entire national debt?

Only a complete and utter fool would financially guarantee these incredibly reckless bets.

Please contact your representatives in Congress and tell them that you do not want to be on the hook for the derivatives losses of the big Wall Street banks.

When this derivatives bubble finally implodes and these big banks go down (and they inevitably will), we do not want them to take down the rest of us with them.

The World is 40 Trillion in Debt. Who the f@&# does the world owe? Jupiter?

The Fed’s Global War of Terror – How it all works! 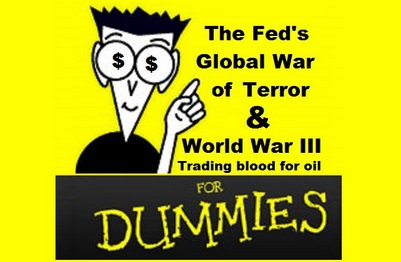