Was Tim Russert of Meet the Press Murdered?

Was Tim Russert of Meet the Press Murdered?

Tim Russert was the host of Meet the Press on Sunday mornings on NBC from 1991 to 2008. Meet the Press is the longest, continuously running television show in history, having started on November 6, 1947.

While no one in the Jewish-Shadow-Government-controlled major media can be called a really tough questioner over the span of the television era, Russert was as tough as they got. On YouTube you can see him ask both major 2004 Presidential candidates G.W. Bush and John Kerry about their membership in the Yale-based Skull & Bones secret society.

Here’s what renowned columnist, Patrick J. Buchanan, wrote on March 24, 2003 in “Whose War?” in the American Conservative magazine right after the US invaded Iraq, about Tim Russert’s question on “Meet the Press” to the war-mongering Jewish neo-conservative Richard Perle:

“The War Party may have gotten its war. But it has also gotten something it did not bargain for. Its membership lists and associations have been exposed and its motives challenged. In a rare moment in U.S. journalism, Tim Russert put this question directly to Richard Perle: “Can you assure American viewers … that we’re in this situation against Saddam Hussein and his removal for American security interests? And what would be the link in terms of Israel?” 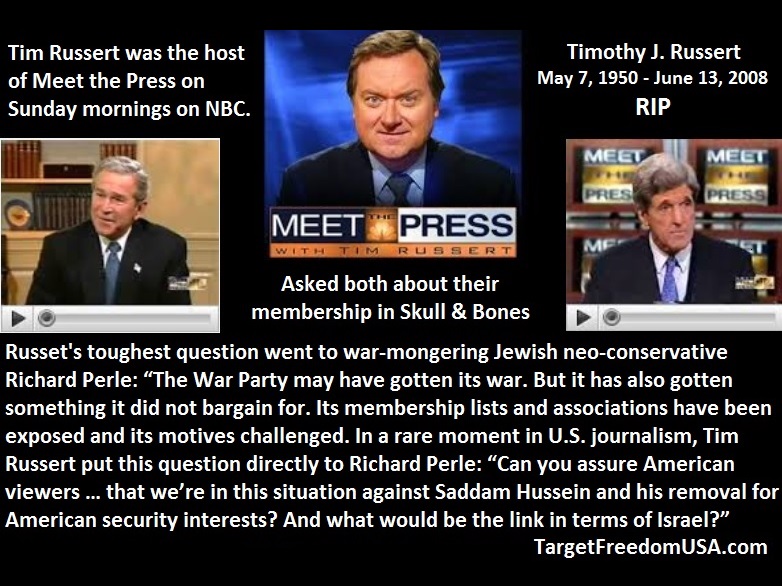 “Suddenly, the Israeli connection is on the table, and the War Party is not amused. Finding themselves in an unanticipated firefight, our neoconservative friends are doing what comes naturally, seeking student deferments from political combat by claiming the status of a persecuted minority group. People who claim to be writing the foreign policy of the world superpower, one would think, would be a little more manly in the schoolyard of politics. Not so.” (End quote from Buchanan article)

In June 2008 it was announced that Tim Russert had died of a heart attack (in the NBC studios if memory serves correctly).

In this post, I want to ask this question: Was the Catholic/Christian Tim Russert given a heart attack assassination-style to remove him from Meet the Press just three month before the International Jewish Banksters pulled off the $17 trillion heist known as the “bailout”?

And, this was only a year to a few years before Nobel-Peace-Prize Obama would be bombing seven Mideast countries simultaneously WITHOUT proper Congressional approval – and without any meaningful scrutiny from the new “stars” of Meet the Press.

Let the record show that Russert was replaced by the lackluster Khazar Jewish operative, David Gregory — a man who could be counted on to “carry the ball” at all times for the organized Jewish Shadow Gov, AND its tentacles such as the FED and Goldman-Sachs.

As David Gregory took the helm at Meet the Press, its ratings began to plummet until NBC fired Gregory in 2014 — replacing him with the even more-lackluster Khazar Jewish operative, Chuck Todd. Todd’s ratings have been even worse than Gregory’s, which has to bring a smile to the faces of those normal, alert Americans who are watching these things.

Note to Chuck Todd and NBC Executives: you need at least SOME degree of unpredictability to achieve high ratings with any kind of talk show. You CAN NOT get high ratings and real viewer interest by conducting Communist-style propaganda hours disguised as a “news show.”

The reason for the timing of this column about the death of Tim Russert — is the absolutely disgraceful Meet the Press edition which Todd conducted this morning, December 7, 2014. No tough questions — and, for those who could read between the lines — an all out effort to lay the groundwork for militarizing the local police AND making the local police and sheriff’s offices mere tentacles of  the Jewish-Shadow-Gov’s Homeland Security.

In other words, Michael Chertoff and other Trotskyite Jewish Communists can’t stand that the local police departments and local Sheriff’s offices are basically still independent. For instance, 300 out of the nation’s 3000 sheriffs told Obama in recent years that they would not let the federal government come into their counties to confiscate citizens’ guns. This is absolutely unacceptable to the would-be tyrants who still seek to establish a world Communist dictatorship for us, with them running the Dictatorship, and exploiting and oppressing the “goyim”, or human cattle (as the Talmud calls non-Jews). They need local police departments who are simply tentacles of the envisioned national KGB-Gestapo Homeland Security Department — and will obey orders to kill and suppress any citizens who might resist their envisioned, coming tyranny. Subtly laying the groundwork for such an anti-Constitution KGB-style Police State — was a major gist of today’s edition of “Meet the Press.”

(By the way, the John Birch Society warned against this type of power grab back in 1968 with their slogan, “Support your local police — and keep them independent.” “Anarchy USA” from 1964 is now up on Youtube, and Alan Stang’s book, “It’s Very Simple”, written circa 1968 after the riots of that era, explained way back then the dynamics of how the Big Media is trying to use Ferguson and other similar incidents to stoke racial tensions today, as part of an overall goal of creating chaos to be followed by establishing one national police force under the control of Trotskyite Communist Khazar, Talmudic Jews like Michael Chertoff.)

In the same vein, it seems to me one may suspect that someone like Tim Russert, who was not consciously with the gameplan to bring the United States of America down, and who occasionally asked very tough questions in the interest of the American people – had to be taken out of the anchor’s seat of such a prominent national TV program, and replaced with reliable operatives like Gregory and Todd.

The late author and speaker, Edgar J. Steele (who was murdered in an Idaho prison through at least the withholding of needed medicine, after being framed by the Shadow Gov), wrote and said many times that for the last 100 years, the Jewish Shadow government has been taking the hands of white European-descended men off the levers of power and grabbing the levers of power with their own hands. Steele would say that white European-descended men now needed to take back the levers of power in the USA, which means prying the Jewish hands off those levers of power. Such blunt statements as this are undoubtedly why he was framed, jailed, and killed in prison — especially in light of his talking about running for Governor of Idaho (Steele was a lawyer and a formidable speaker; he was a guest on one of my congressional campaign sponsored 1 hour radio shows circa 2008 on WKRC, the 50,000 watt talk show station in Cincinnati, Ohio). 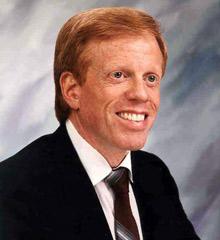 Steele, like Jim Traficant, or Ron Paul for almost all of his 30-year congressional career, represented the exact type of leader whom the Jewish-Shadow-Gov-controlled Big Media tried to block from the view of the American people, so we could “enjoy” leadership from such disgusting puppets as John McCain and Mitch McConnell.

This is what I see as relevant in the death of Tim Russert. Whatever the cause, the hands of another basically pro-American European-descended man were removed from a key lever of power in the USA, and his hands were replaced on Meet the Press by reliable operatives of the organized, worldwide Jewish Shadow Government, namely Khazar Jew David Gregory, and Khazar Jew Chuck Todd. The funny thing is to watch these Trotskyite Communist operatives destroy the high ratings Tim Russert had achieved for decades as they try to make Communist propaganda look like “real news” and “real analysis.” 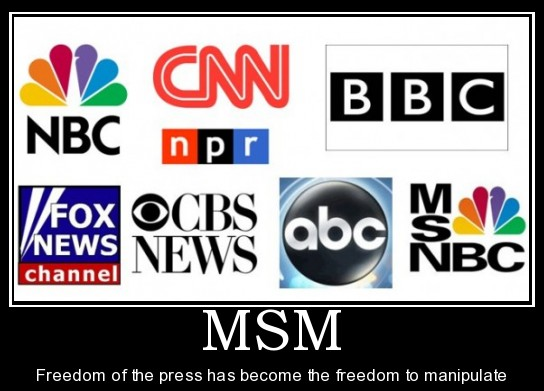 It is well known that there are quite a few ways to give people a heart attack with poisons that disappear in the blood stream about fifteen minutes after such poisons are administered. These poisons are even talked about on some of the burgeoning editions of reality crime-solving TV shows, such as on the cable station Investigation-Discovery (ID), or Forensic Files on the cable station that is still called CNN Headline News.

In September 2013 I met with a former White House staffer (who served a former President several decades ago for a number years) at a Washington D.C. hotel about several important research projects touching on game-changing events of the past 100 years. Near the end of the four hour session, I ran by this person my strong suspicion that Tim Russert was taken out, and did not die a natural death. Without hesitation, this person agreed, and had felt that this was the case ever since Russert’s death was announced in 2008. Needless to say, these suspicions do not prove what really happened in the case of the death of Tim Russert.

But I close by again asking the question: Did Meet the Press host Tim Russert die a natural death from a heart attack at age 58 — or was he taken out by high-tech assassination methods to clear the way for Khazar Jews David Gregory, and now Chuck Todd, to fill his seat?